I always love hearing from y’all, and many of us have swapped stories off blog. But every once in a while, I think, “everybody’s going to want to hear this!” This is one such story, continuing our Halloween theme, from reader SD. A great essay, and I thank her for “outing” some of the inner dialog and perhaps less altruistic feelings many of us parents have. Enjoy!

Hi! I sent you a story about this time last year about my son, who was laughed at the first time he “went public” donned as a princess at a Halloween party with my husband’s colleagues. A year has passed, and my son, now 5 1/2, is still very much into all things pink and princess-related. Despite the fact that my family and I continue to grow and become stronger in our resolve to support our youngest member, I still find myself in new, unpredictable, and challenging situations. So I write to you today about the “Wig Dilemma of 2013.”

I took my 3 sons on our annual trip to the costume store to pick out their Halloween attire. In my mind, I had a price limit for each (costumes are expensive!). My oldest son had purchased a mask with his own money, so I was able to get him the rest of the costume and stay within budget. My middle son already had all of the elements for his costume from previous years, but needed shoes. I was able to find what he needed at Payless for a steal. My youngest 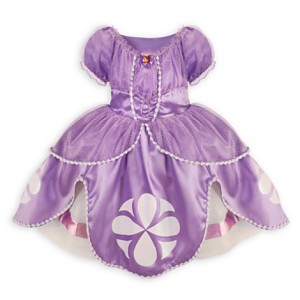 son spied a lovely purple Sofia the First gown and was instantly in love. The dress itself was at the budgetary limit…but what he wanted even more was the “amulet” (the necklace that gives Sofia special powers). It was *only* $6, so I bought that too. (If you are keeping score, I was already over budget at this point.). He asked if I would buy him a wig as well, and I said no, explaining that it cost too much. (and conveniently, they didn’t have any Sofia wigs at the costume store anyway).  He didn’t argue; he was just so thrilled to have his gown and amulet.

In the days that followed, my son wore his dress around the house quite a bit. He wore the amulet from the time he woke up until he went to bed most days. I was enjoying the sense of relief we moms feel when, by early October, the Halloween costumes are all ready to go!

Then I started thinking more…about the wig. You see, my son probably would have been perfectly happy with just his gown and amulet. After all, I said “no” to the wig, and he didn’t even argue! But I started to consider how my other two sons and my husband would feel when we went trick-or treating.  The fact is, if he wears a wig, he can pass for a girl and there will be no questions, no comments, no laughter. I won’t have to worry about his brothers being embarrassed or worse, him having his feelings hurt by cruel comments (whether intentional or not). I slept on this and deliberated with myself for days, and ultimately, I bought the wig.

As I mentioned, the wig wasn’t available in stores, so I had to order it online. When it arrived in the mail, I was overcome with simultaneous feelings of relief and guilt. I was relieved that I could take my kids out trick-or-treating without having a knot in my stomach. I felt guilty because I had a very good reason for NOT buying the wig to begin with, and then I caved…and not because of a nagging child, but because of my own insecurities. I have justified it again and again, that I did it for my son, so he won’t risk having his feelings hurt. And I did it for my older sons, so they won’t be embarrassed. But if I’m being really honest with myself, I did it for me, so that I won’t have to risk having MY feelings hurt or feel embarrassed, or WORSE, experience the pain and helplessness that mothers feel when their kids are hurt and embarrassed.

I pride myself on being an advocate for my children. My son does not hide his preferences for “girl” things from anyone, and he is supported and accepted by really everyone we know. But this wig experience has really left me tangled inside (pun intended!). I suppose it has taught me that despite being enlightened and well-intended, I am only human…and sometimes the price of being human is $12.99 plus shipping.

This entry was posted in Holidays, Parenting, Princesses and tagged boy princess, Halloween, Sofia the first, trick or treat, wig. Bookmark the permalink.