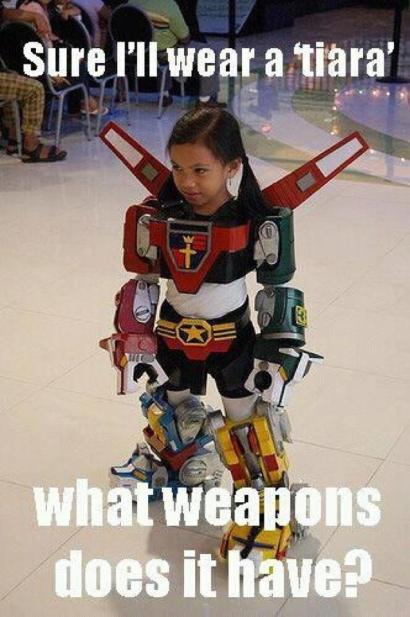 This picture is making the rounds on Facebook the last couple days. I could definitely see

my own four year-old daughter asking this question; one of her favorite books is Brave Margaret, in which the heroine, faced with a sea serpent, pulls an axe from the folds of her dress. This would be my daughter’s preference — to have the tiara and fancy dress and also to kick ass.

This morning she had a fever of almost 102 degrees. We were snuggling on the couch and she was pretty whiny. To distract her, I read to her about Black Agnes, Grace O’Malley, and Chiyome.

Agnes Randolph, called Black Agnes because of her dark hair, was left in charge of the castle of Dunbar with only a few servants and retainers, when it was besieged by the Earl of Salisbury, considered one of the finest military commanders of the day. Agnes refused to surrender the castle —

Salisbury began the siege with a bombardment by catapults, sending huge rocks and lead shot against the ramparts of Dunbar. Lady Agnes responded by having her maids dress in their Sunday best; she then led them to the outer walls, where with their handkerchiefs they nonchalantly and slightingly dusted away the damage from the bombardment. She would also taunt the English from her walls and berate her garrison to make them fight harder.

Grace O’Malley (or Gráinne Ní Mháille in Irish) was a sixteenth-century Irish pirate, sometimes called the Queen of the Pirates or the Sea Queen. There are many tales and legends of her exploits, but our favorite is when she met the Queen of England, Elizabeth I, to ask for release of her relatives who had been taken prisoner. Queen Elizabeth agreed to meet her after receiving her letter, which asked her to grant Grace,

free liberty during her life to invade with sword and fire all your highness enemies, wheresoever they are or shall be, without any interruption of any person or persons whatsoever. 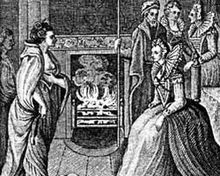 There is something satisfying about the meeting of the Queen of England and the Queen of the Pirates, both formidable women in their day. It gives a very different feel to the idea of a “princess in her tiara!”

Mochizuki Chiyome created the first school of female ninja (kunoichi) in sixteenth-century Japan. Her students were drawn primarily from unwanted girls — orphans and girls on the street. They were taught traditional combat skills and weapons, but were also taught all the skills of Shinto shrine attendants, so they could move freely and without suspicion. They had all kinds of cool hidden weapons that put James West and James Bond to shame.

Perhaps the greatest disservice the Disney princess phenomenon has done is to equate princesses with nothing more than appearance-fixated fashion plates. We have lost touch with the variety of stories of real princesses and heroines of our history, who were varyingly brave, feisty, defiant, clever, diplomatic, or shrewd. They often struggled in a world hostile to women – facing rape, murder, and charges of witchcraft for daring to claim strong womanhood. They were often also fiercely devoted mothers as well as strategists and fighters. I’d love to see a series of dolls that included a place in the folds of the fancy dress for a battle ax, and a tiara that could be turned into a throwing star!